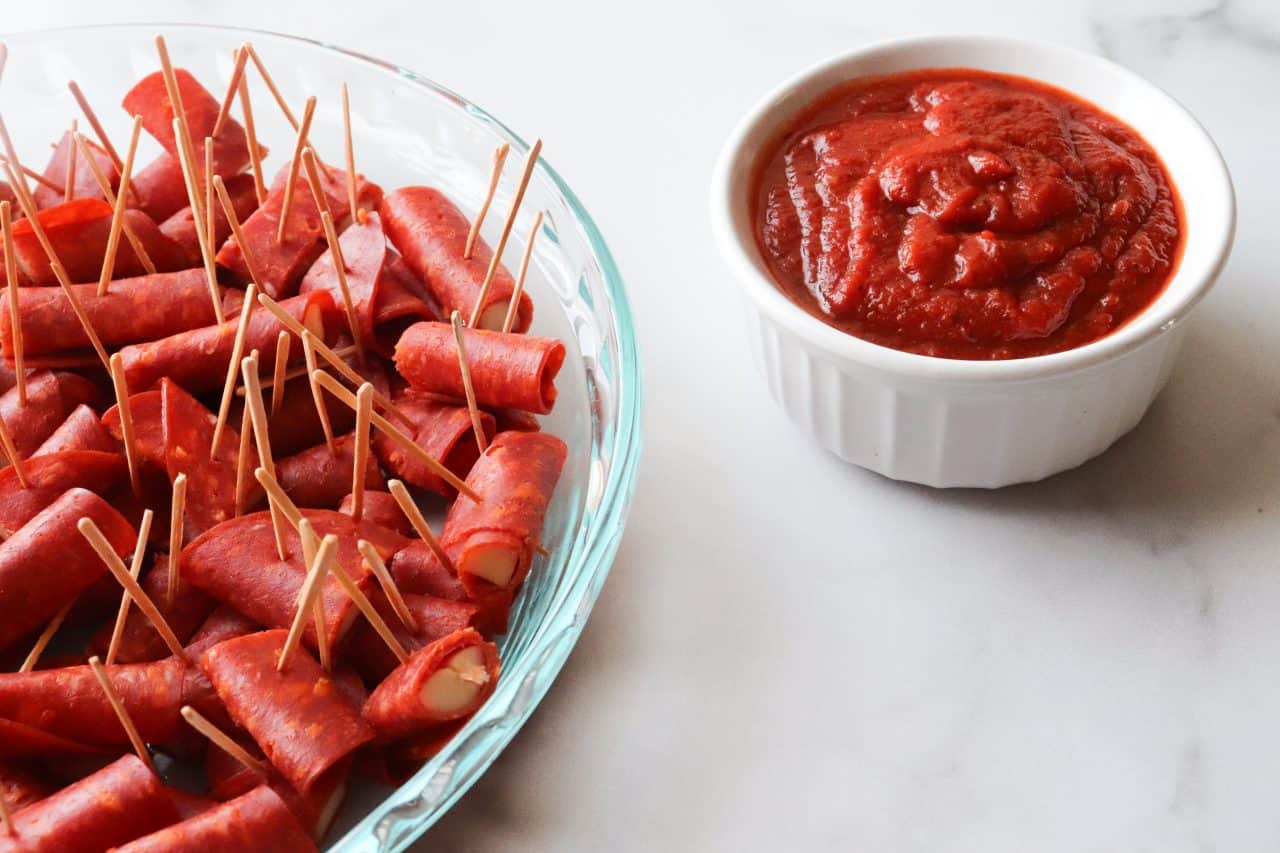 Looking for something extra delicious and easy to bring to your next event? Try these two ingredient pepperoni appetizer bites. They are so easy to make and something that just about anyone will enjoy.

Even though the bites only have two ingredients, they pack a LOT of flavor. Make them ahead of time and carry them with you to your next party. Lets get cooking (or rolling)! 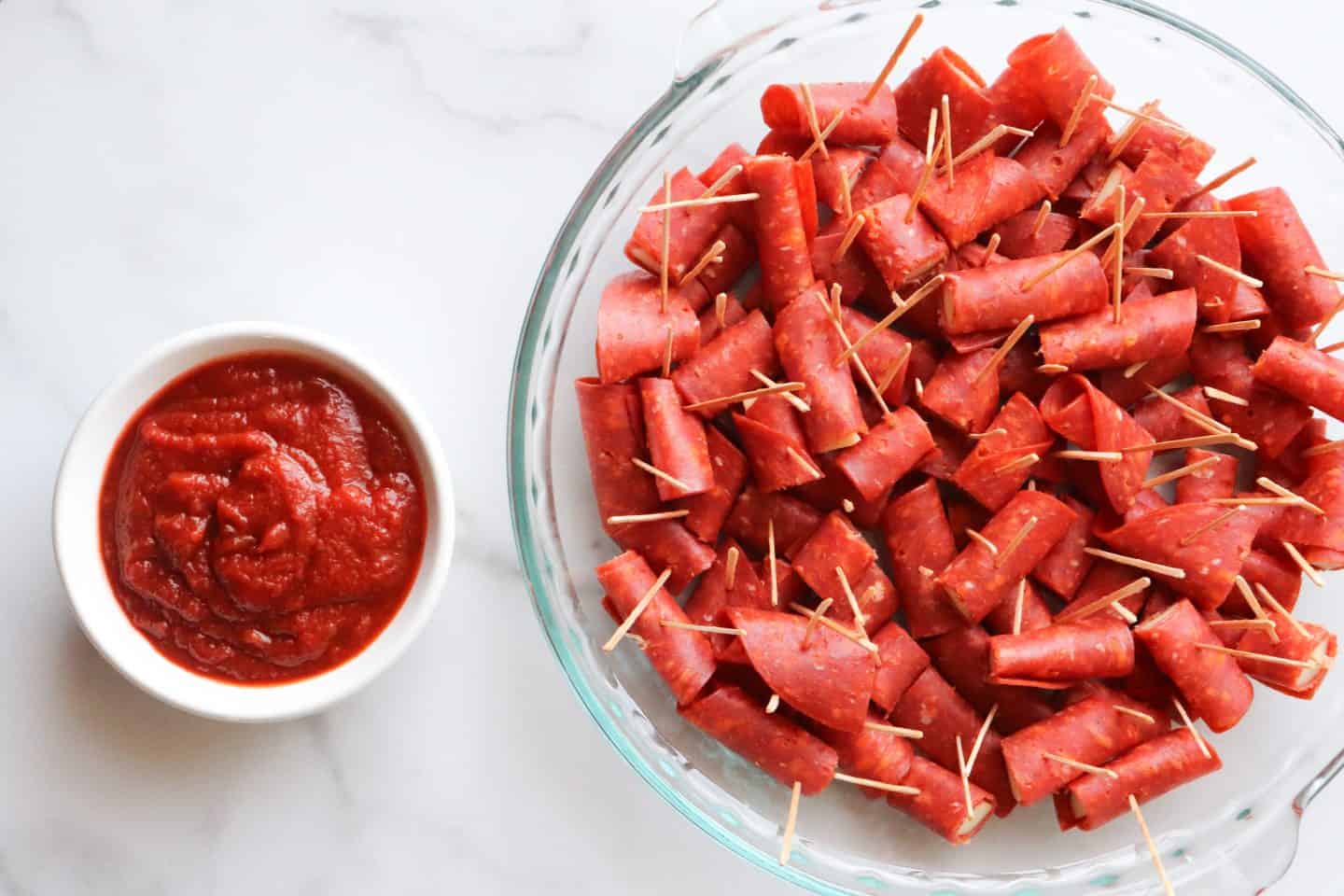 These bites make a delicious appetizer that almost anyone can enjoy. I love that they are an easy gluten free appetizer option to bring along. You can also make them up as a quick snack for your children. They would pack easily along in a lunch box, or whip them up for a fun after school snack. 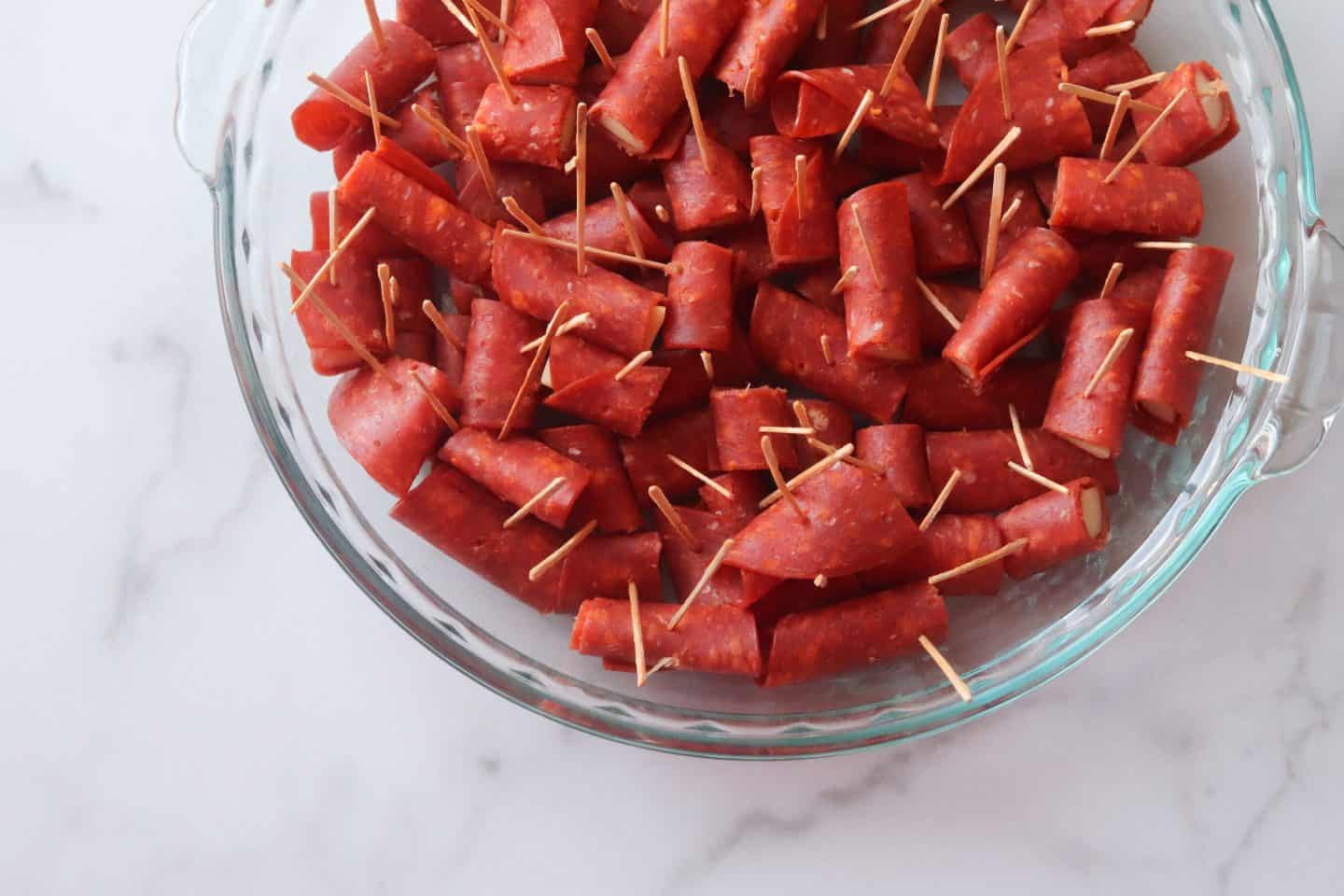 I like using Applegate pepperoni as the base of these appetizers. Applegate’s pieces of pepperoni are about the size of a piece of salami so you can get three bites from one piece. Also, I love that Applegate LABELS for everything. As someone who has a mustard allergy, I can’t tell. you how many times I come across pepperoni or cured meats that have mustard, so it will always be my go to pepperoni.

Make sure that when you pick out your pepperoni you are picking pieces that are fairly large. In a pinch salami would work well, but just make sure if you are gluten free and following a Keto lifestyle that you are also getting a compliant pepperoni or salami. 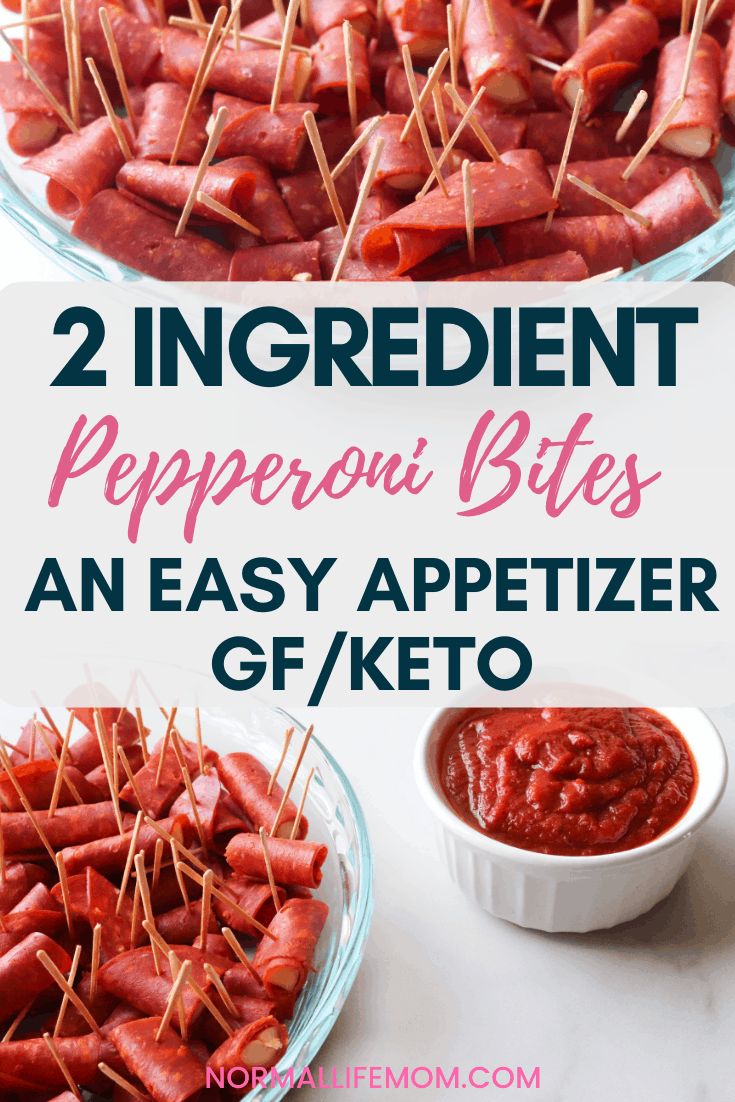 How To Make This Cold Pepperoni Appetizer

First, take your piece of pepperoni and lay it on a flat surface,

Next, take a piece of string cheese and cut it in half lengthwise. Then cut the half in half again. You will have four piece of cheese.

Then, take your pepperoni and place a piece of string cheese on top and roll it up with the seem facing down. 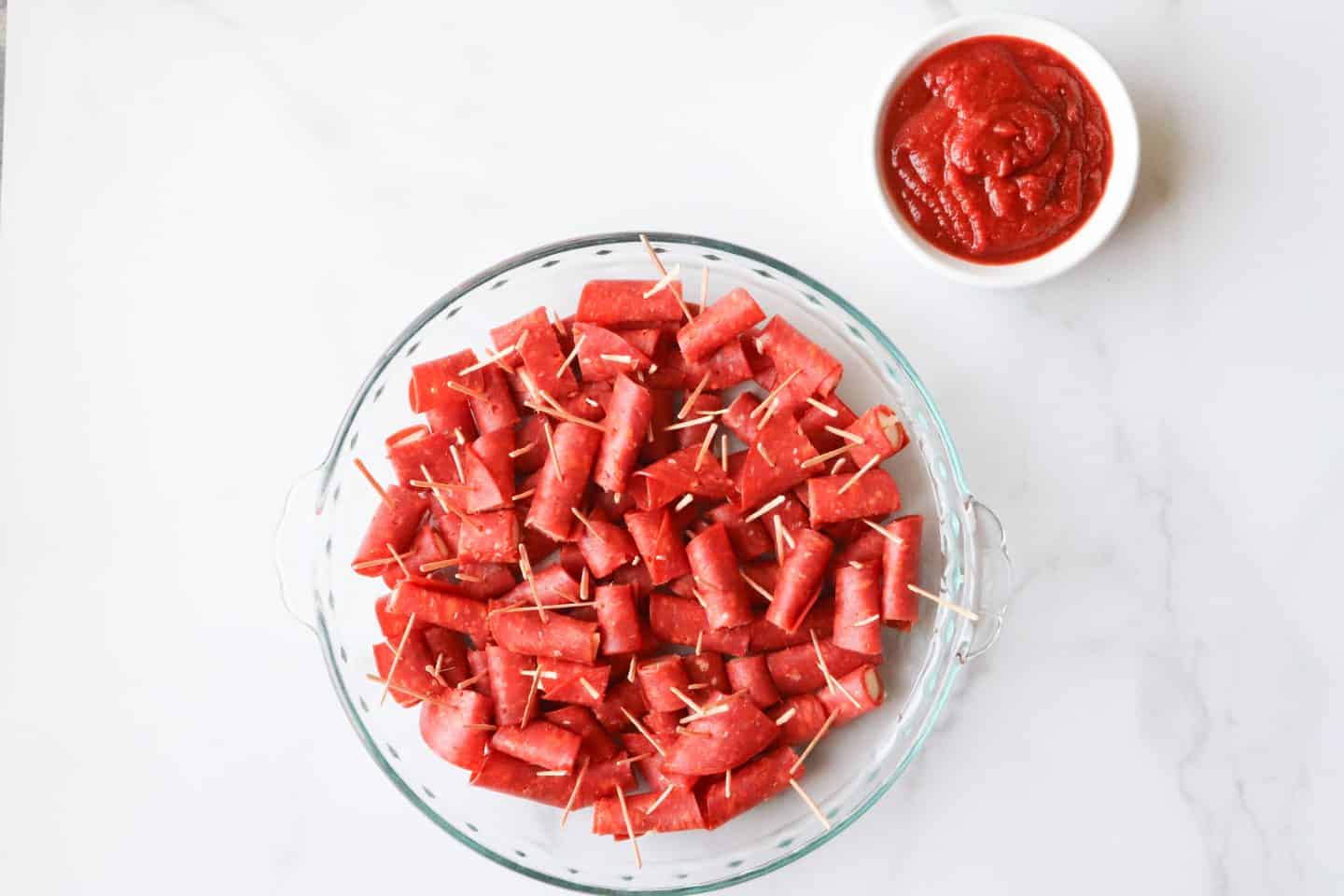 Finally, stick in three separate pieces of toothpicks into the roll, making sure you poke through to the other side. Place your first two toothpicks at the seem, and then the last one in the middle. Then take a sharp knife and cut through at each toothpick, leaving three separate bites. If you want the the pieces to be larger, you can also make a single cut leaving two pieces per slice of pepperoni.

Optional-Serve this appetizer with your favorite pizza sauce on the side. The sauce can be warmed up or left at room temperature, either work!

1. Take the mozzarella sticks and quarter them. First cut in half, and then cut in half again.

2. On a flat surface lay out the piece of pepperoni

3. Place one of the mozzarella quarters on top of the pepperoni and roll towards you

4. Place three toothpicks in the roll with the seem side down and cut into three equal parts.

5. Serve alongside pizza sauce if desired 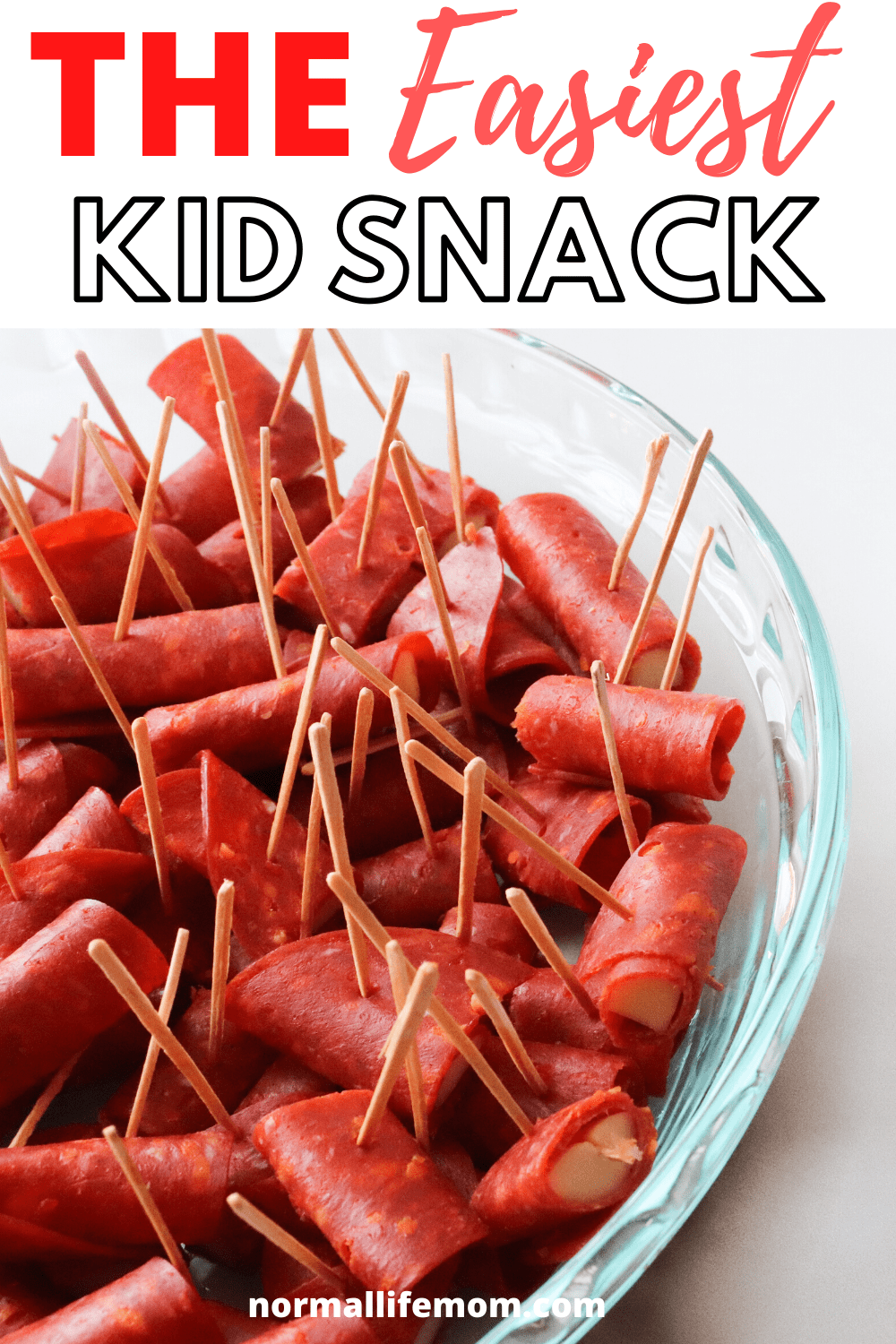 There is no such thing as a normal life, there is just life. Christine just happens to be a mom and lives in Normal, IL and blogs about food, family, and fun. 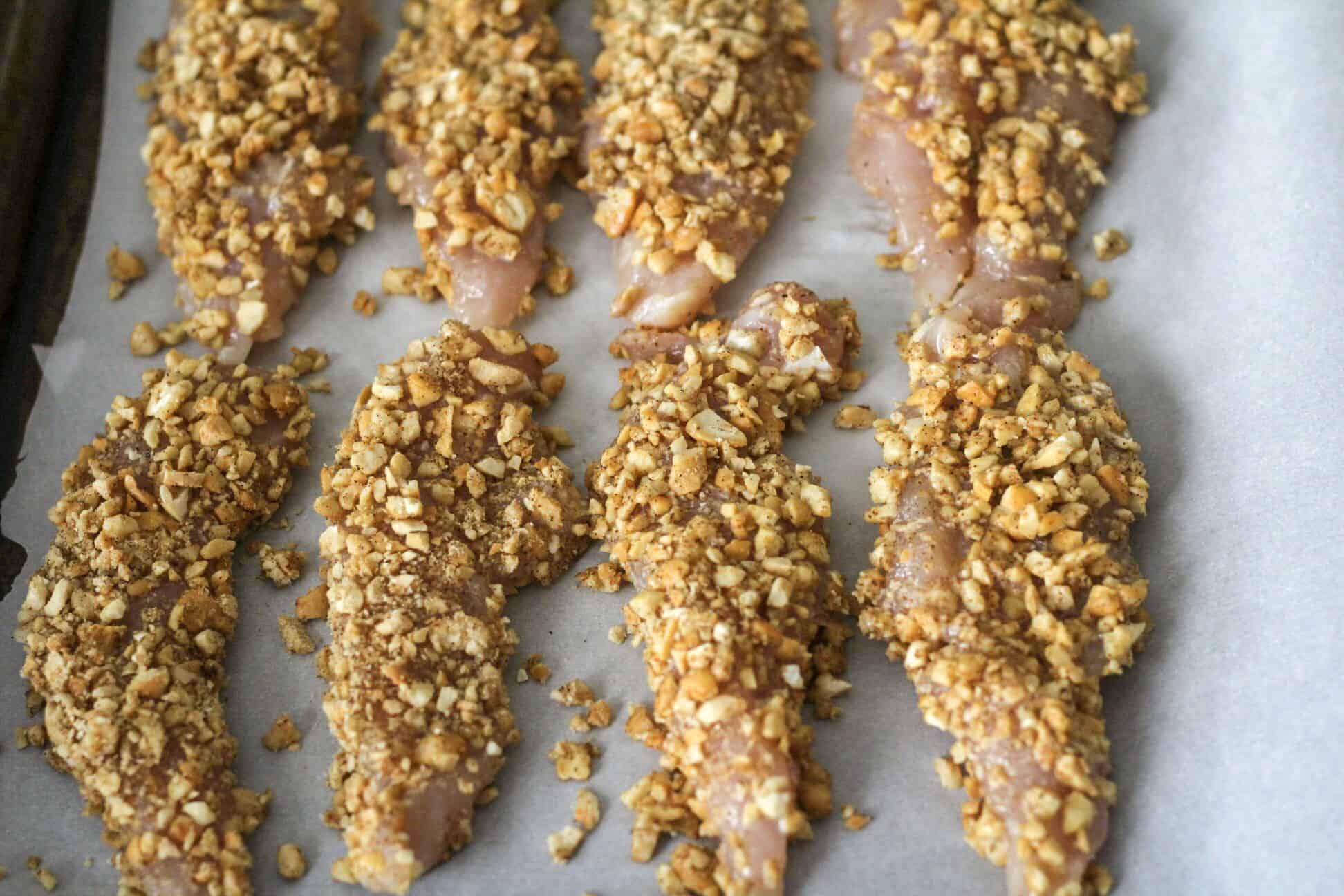 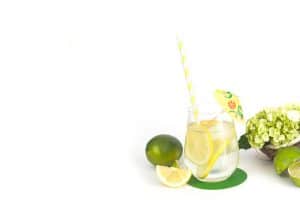 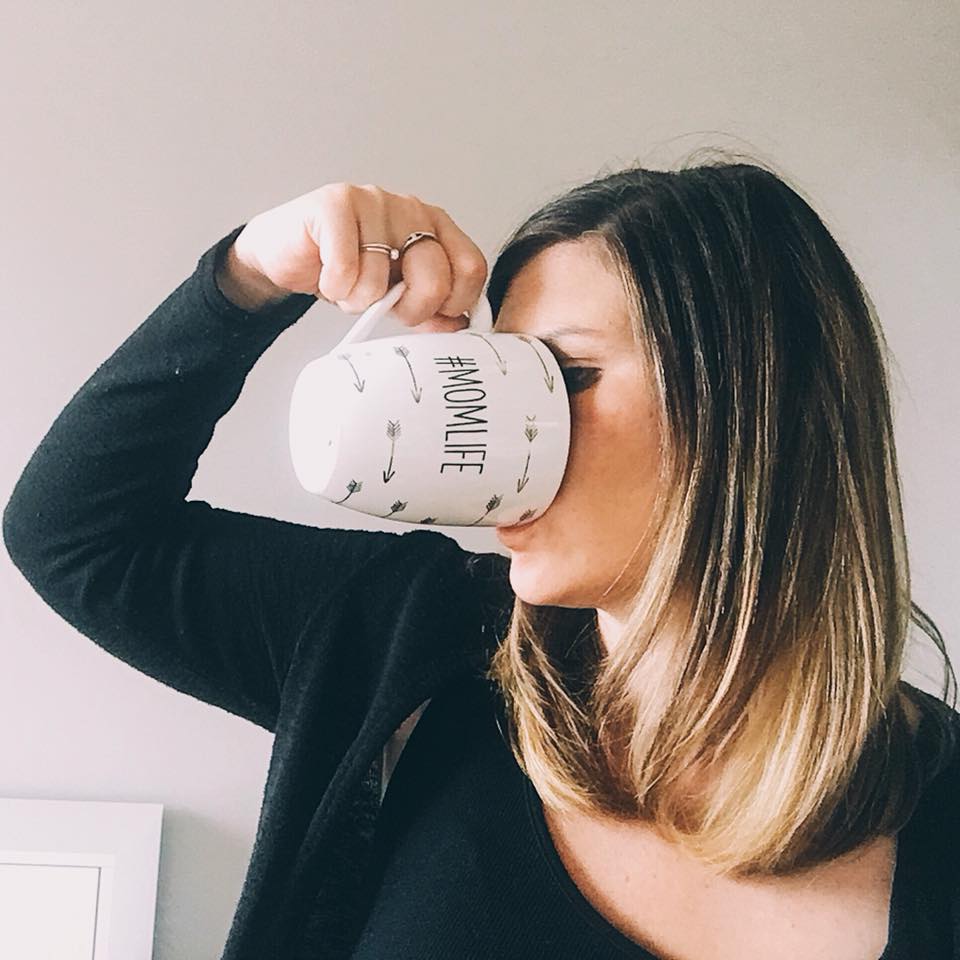 I'm Christine, a mom lives in Normal (a real place). Here to share all things food, family and fun! An emphasis on healthy family friendly foods and snacks (with allergies in mind), DIY learning activities and play ideas. Plus all things toddler/preschool and motherhood related

Get the news right in your inbox!