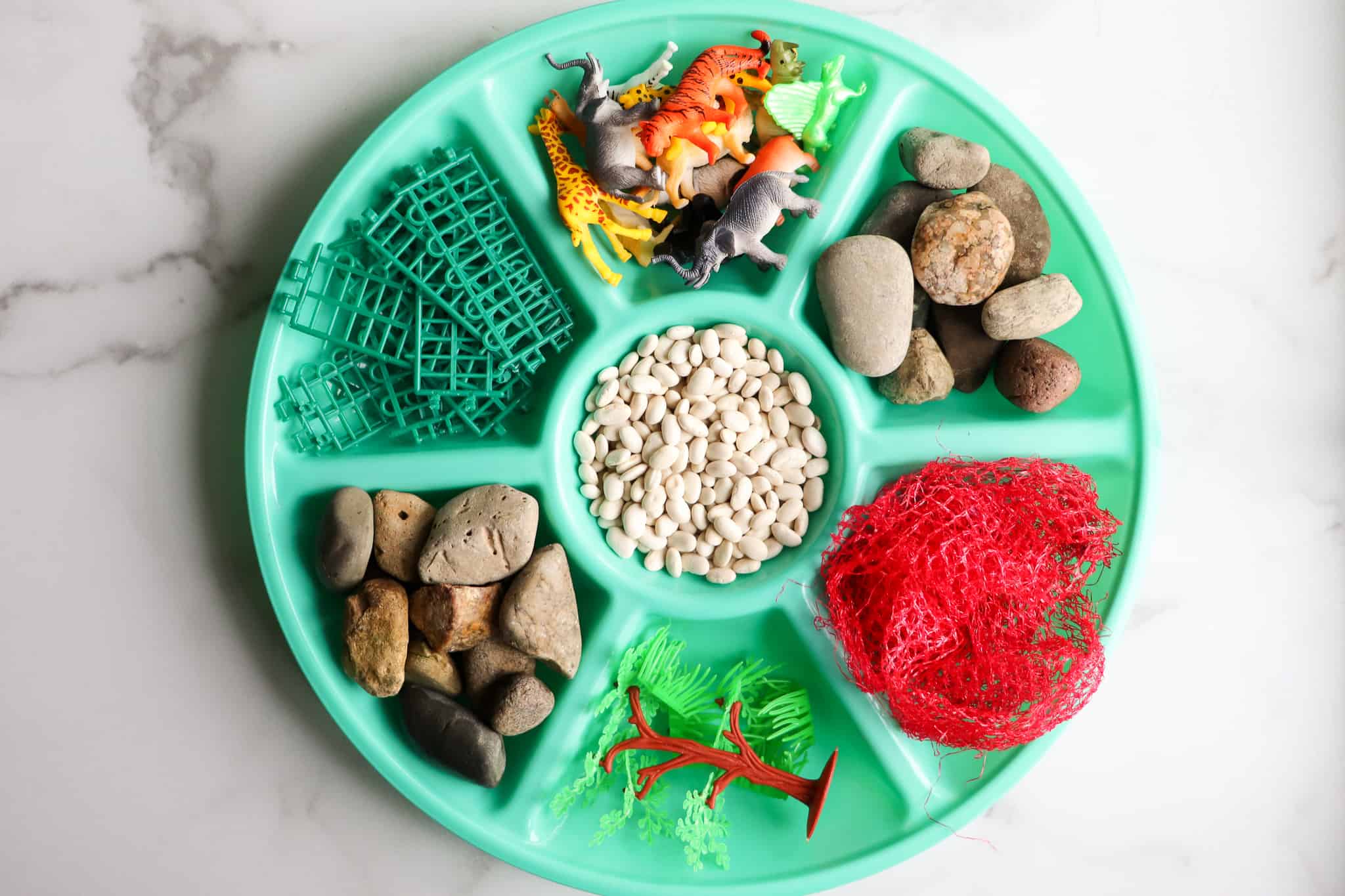 When I was younger I would spend my weekends putting together dioramas. There was nothing better than a fresh shoe box to put a new scene in. My action figures would line up around the box and I would spend hours and hours playing with them. While my daughter isn’t quite old enough to put together her own diorama, I thought it would be so much fun for my preschooler and toddler to put together their own “diorama-esque” safari animal habitat.

We used tons of objects that we already had around the house, and I put together a tray so she could design her safari habitat however she wished. This was such a great activity for imaginative play! 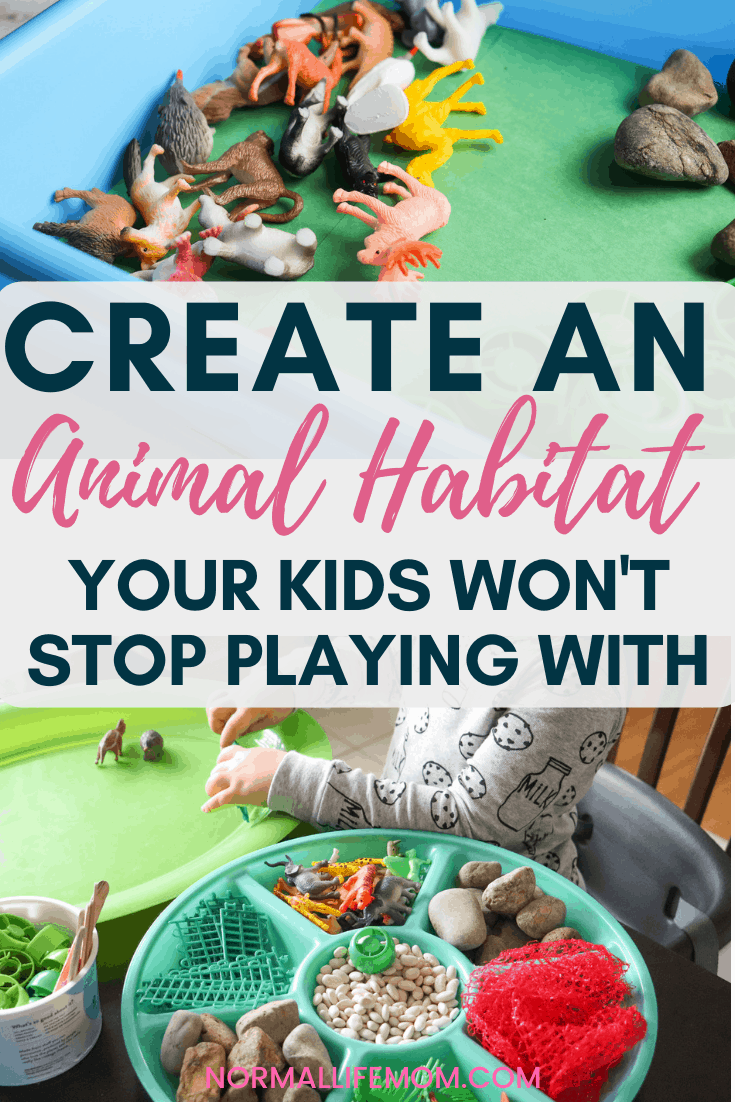 How To Create A Safari Habitat

My daughter is 4.5 and my son is 22 months; I can’t put together one thing for one kid without the other. So I put together two different, but similar, setups that they could manipulate and play with however they wanted.

For my son’s setup I placed all of the objects in a small container that had edges and sorted everything out. I also had a separate serving tray that I placed green construction paper on top of to create a scene. 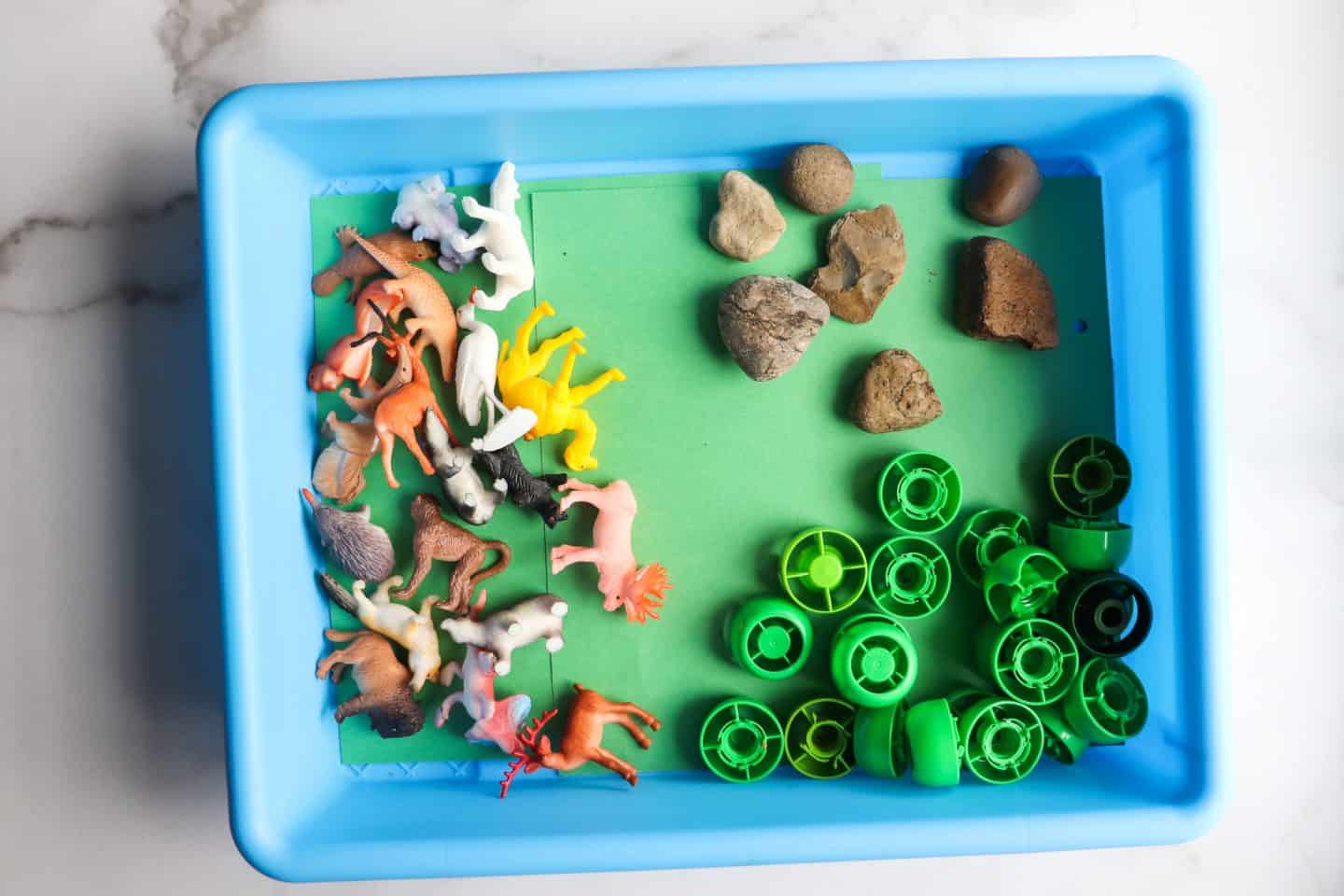 For my older daughter I used a tray from the dollar store and filled it with all types of different materials. Find objects and things you already have around the house.

Our bin was filled with: 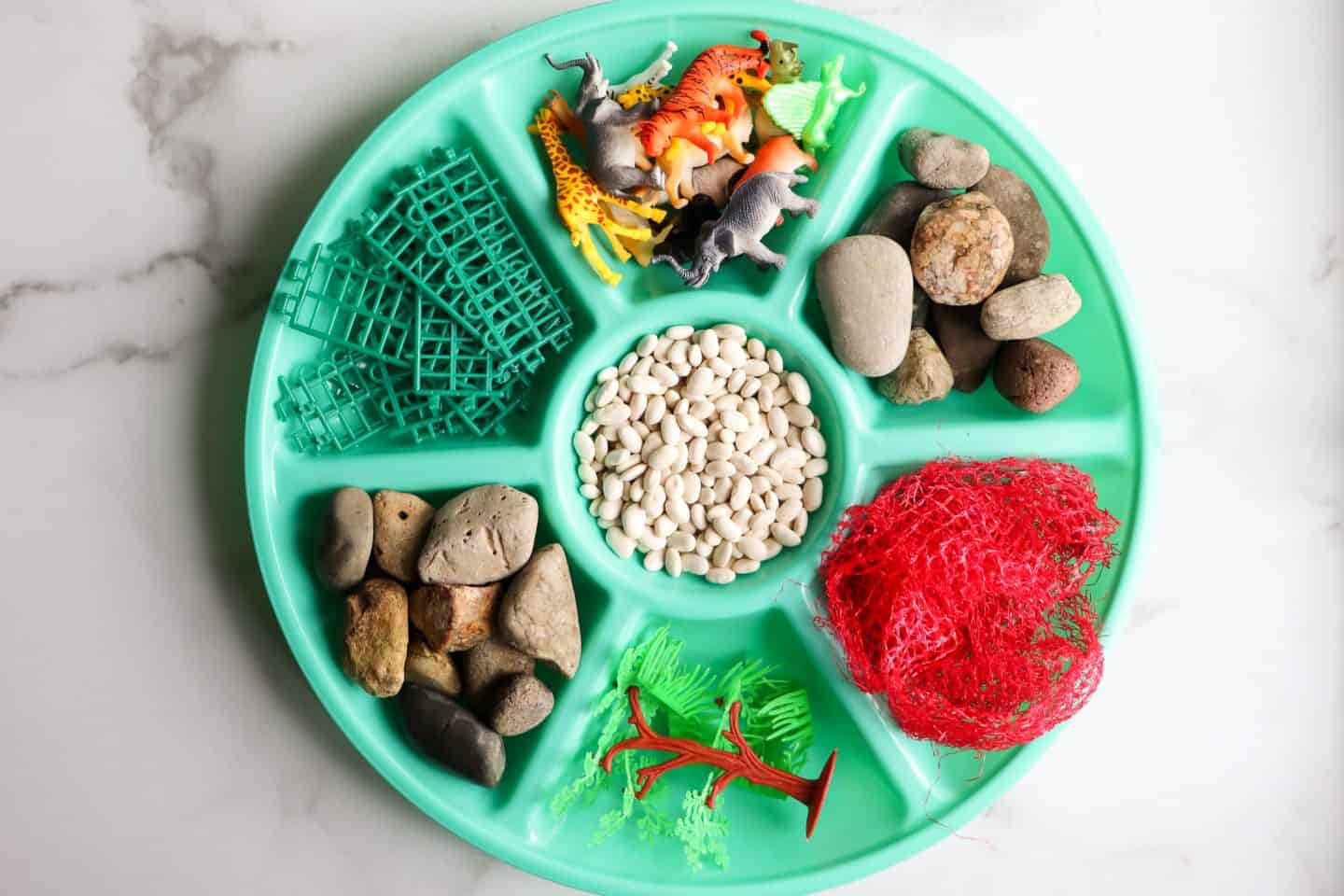 I gave my daughter the tray and then provided a separate plastic tray (just happened to have a green one depicting grass) but any flat surface would work. I gave no instructions except to build an animal habitat however she would like. 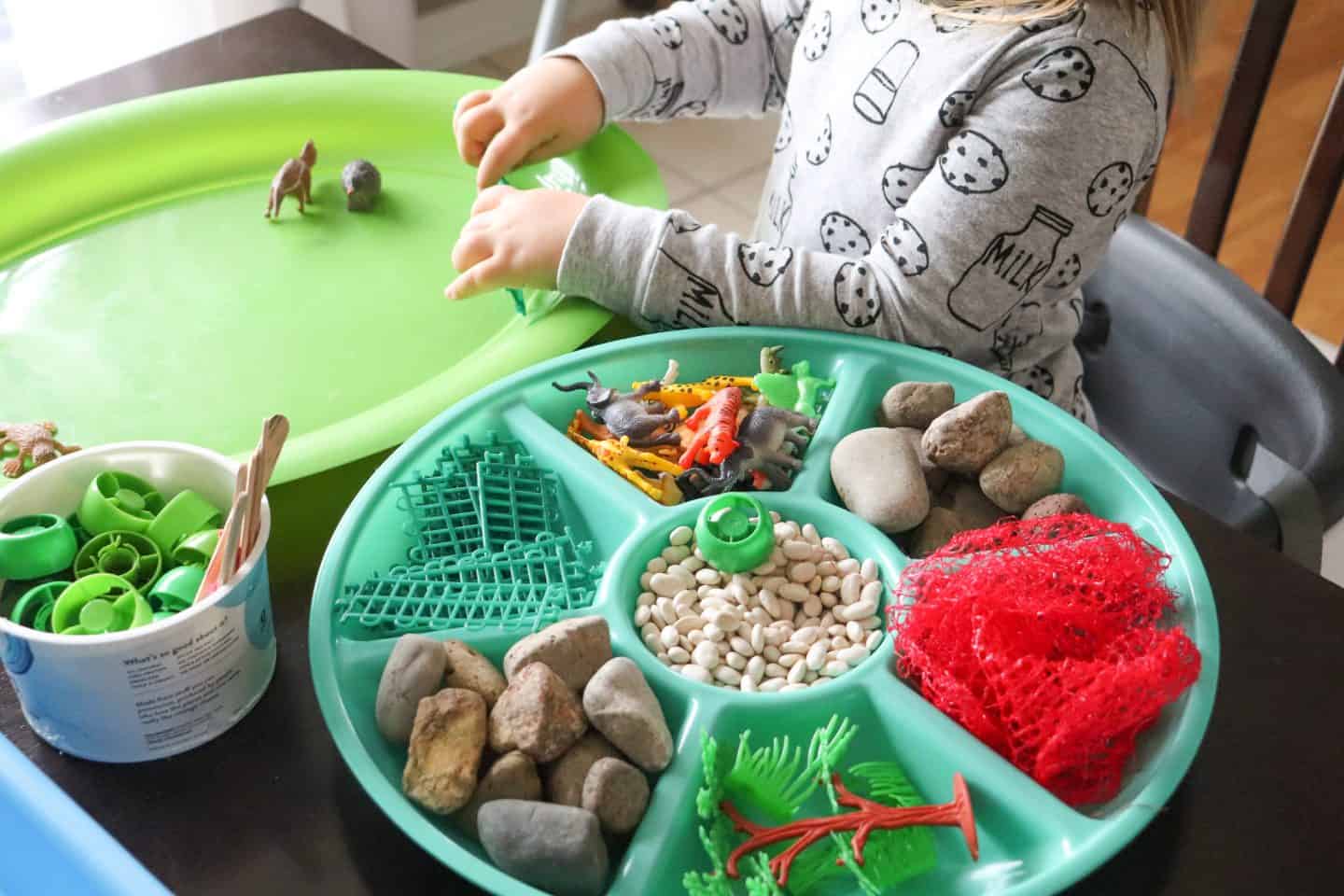 Quickly her imagination took off and she was building mountains and shaded areas for the animals to take a break. She even made the beans into a snow field. 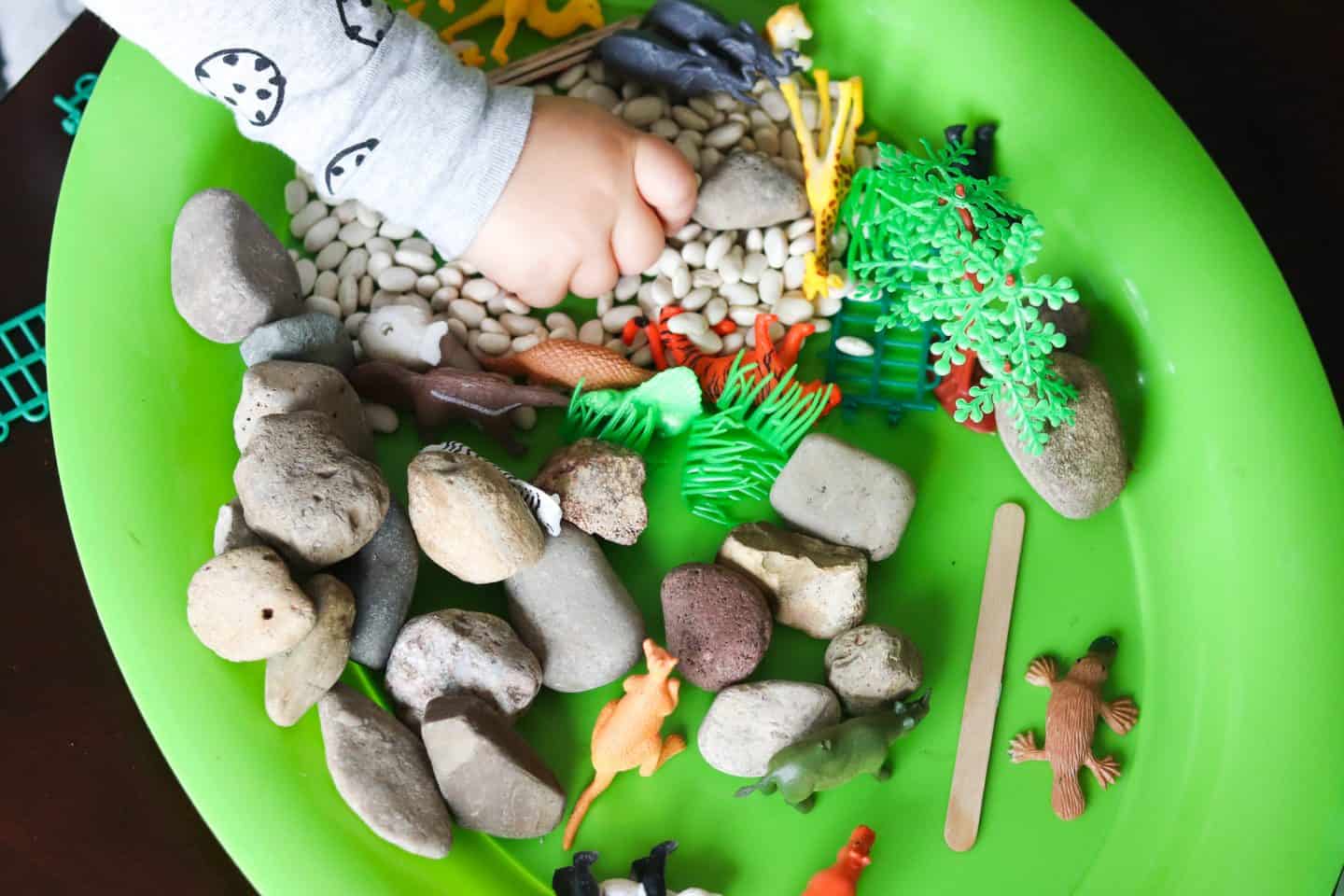 My toddler wasn’t just moving the objects around, but was really enjoying touching everything, feeling the weight of different objects and emulating his big sister’s play. He also loved placing the beans in the pouch caps.. 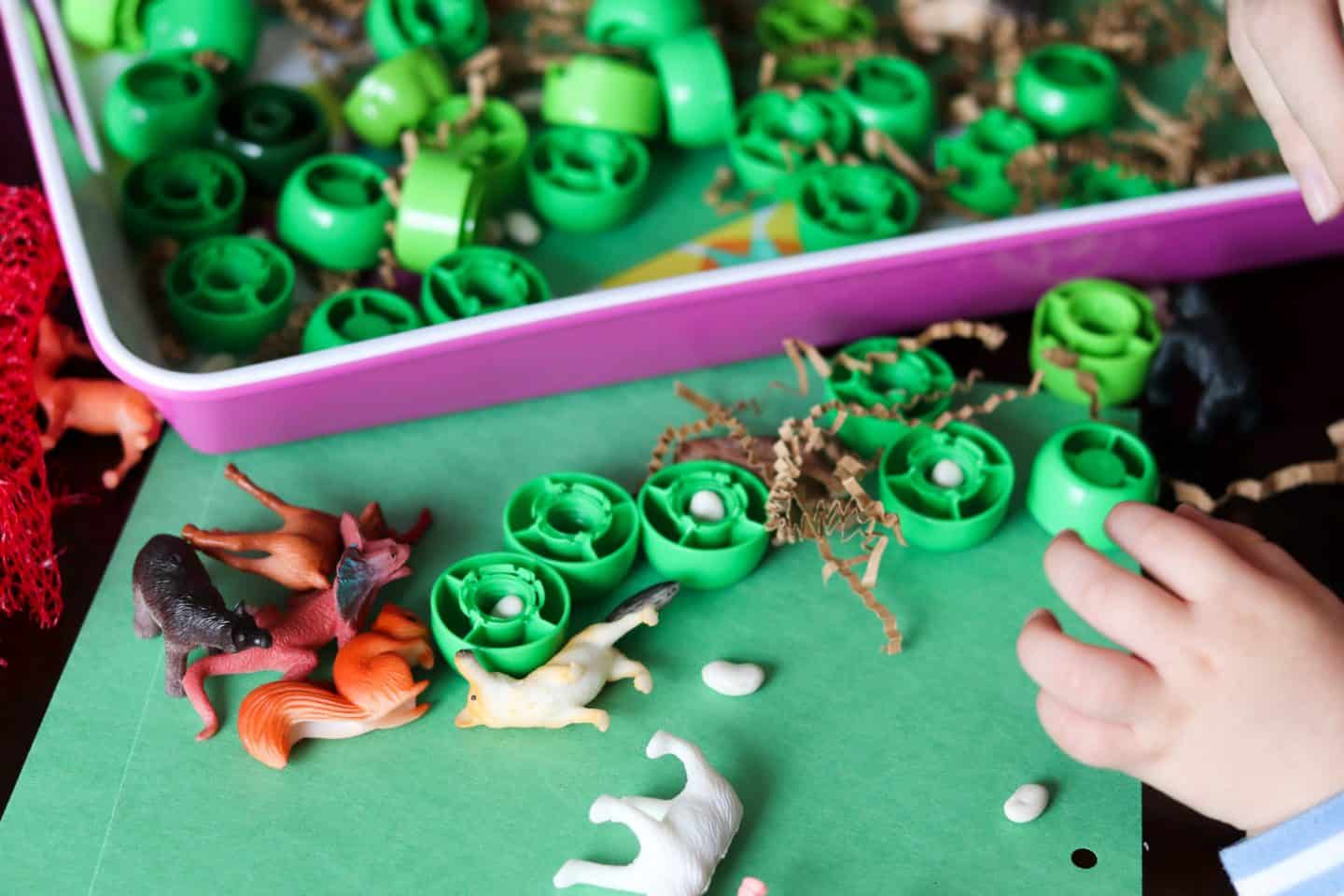 Was the setup worth it? Absolutely! We clocked over an hour of play time, and when it was time to clean up I heard some grumbles. I set everything aside, and both kids came back to playing with it again later in the day setting up new scenes.

This year has really opened my eyes when it comes to toys and how we play. I love trying to find everyday objects, or things that I would otherwise throw away or recylce, and transform them into fun play-based-learning activities. This fun pouch cap sensory bin is a fun way to re-use pouch caps and… 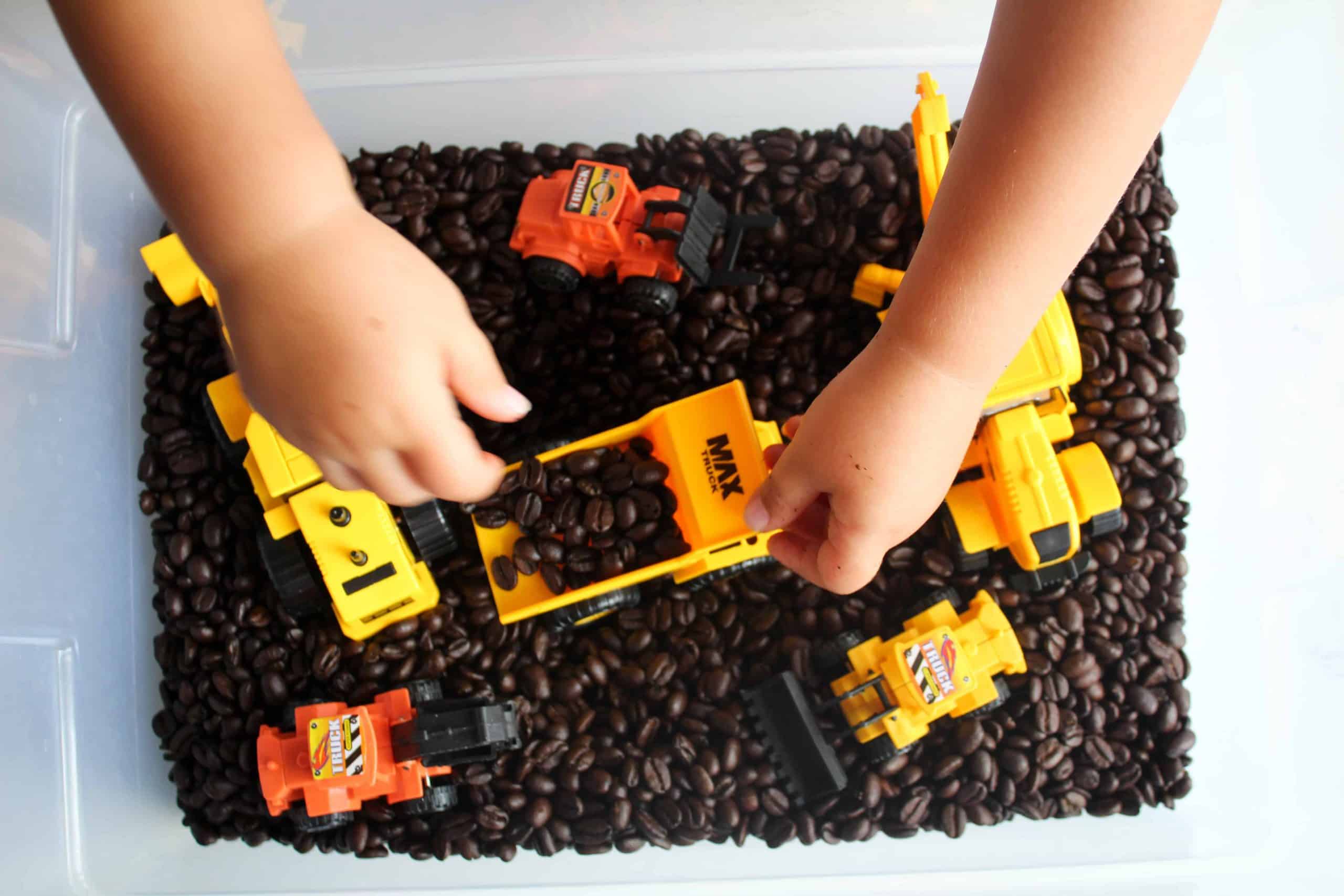 A few weeks ago, I made two huge mistakes in one day. The first mistake was that I went to sleep extremely late and was woken up extremely early AND I didn’t have any coffee. One of THE BIGGEST mom fails ever.  The second mistake, was that I loaded up both kids, hit the grocery… 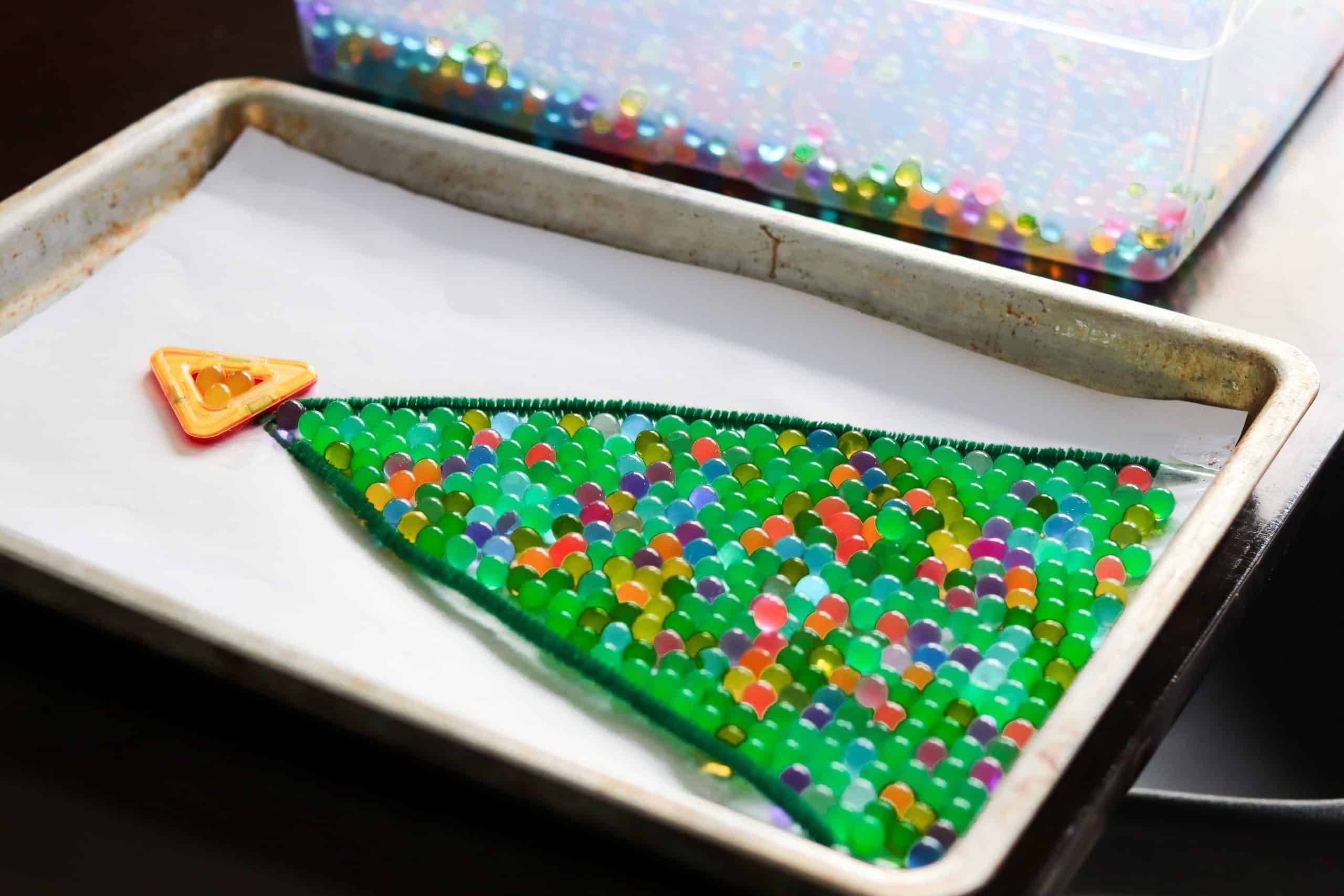 O Water beads, O water beads, how lovely are thy branches?! Ok, those aren’t the words but this fun and easy Christmas activity for preschoolers mashes up my daughter’s two favorite things, water beads and Christmas trees! You can transform your water beads into a beautiful Christmas tree your child will LOVE. They will also… 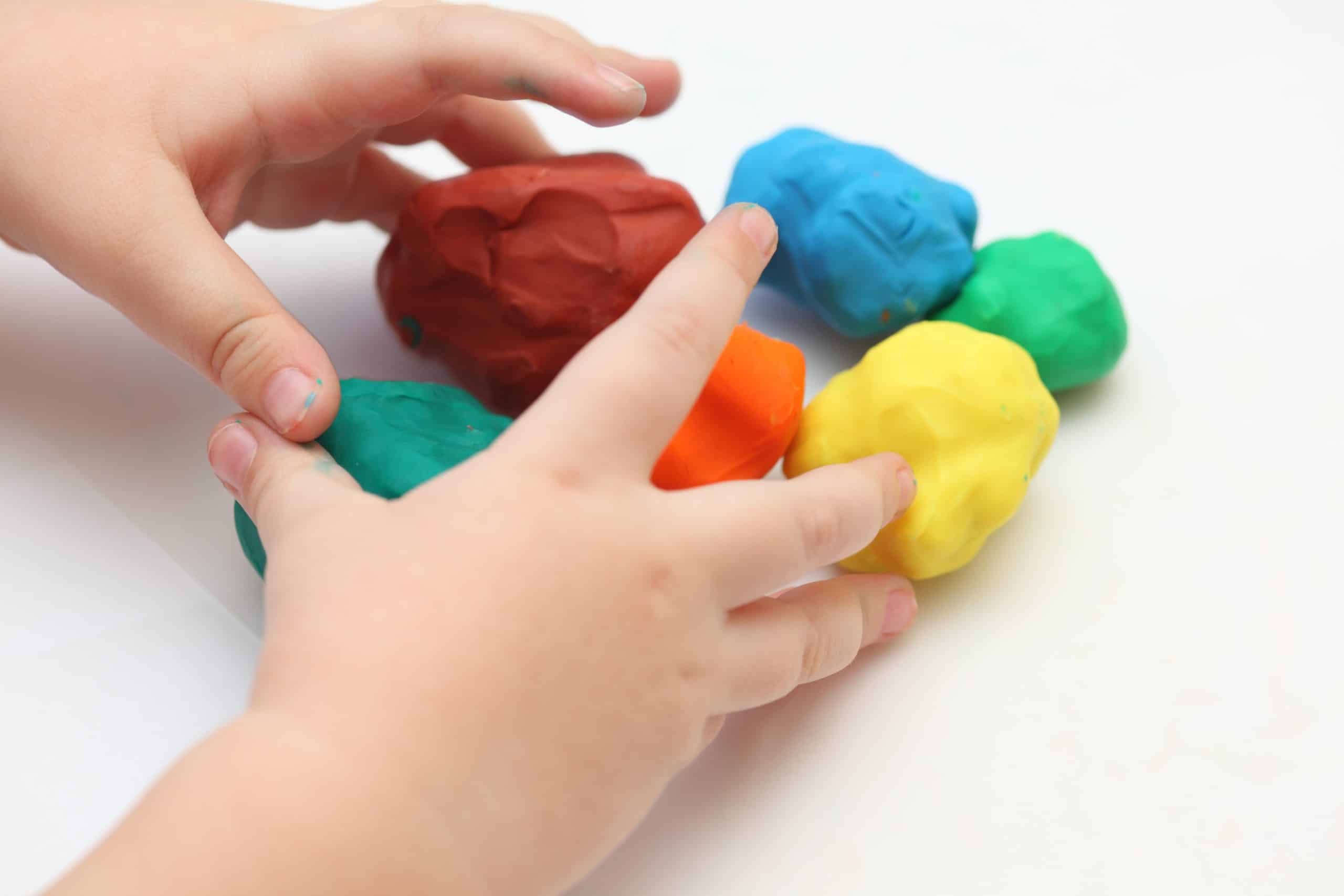 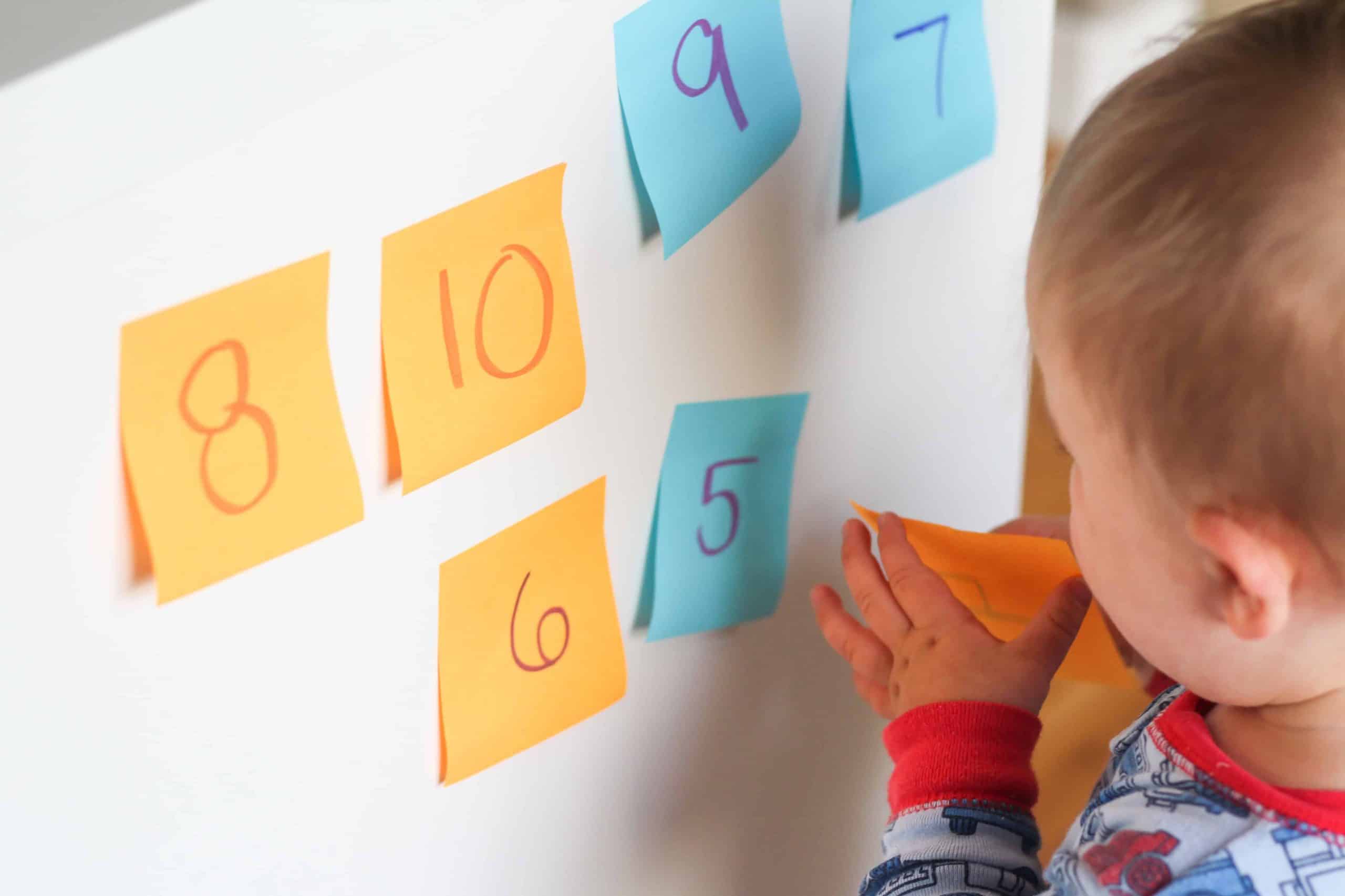 Post it notes are life around here! Whether I am using them to remember what’s for dinner, write a little reminder for myself or incorporating them into some sort of play-based-learning games, we have a ton of post it notes. I always recycle the post-its, that is the beauty about those useful squares, but you… 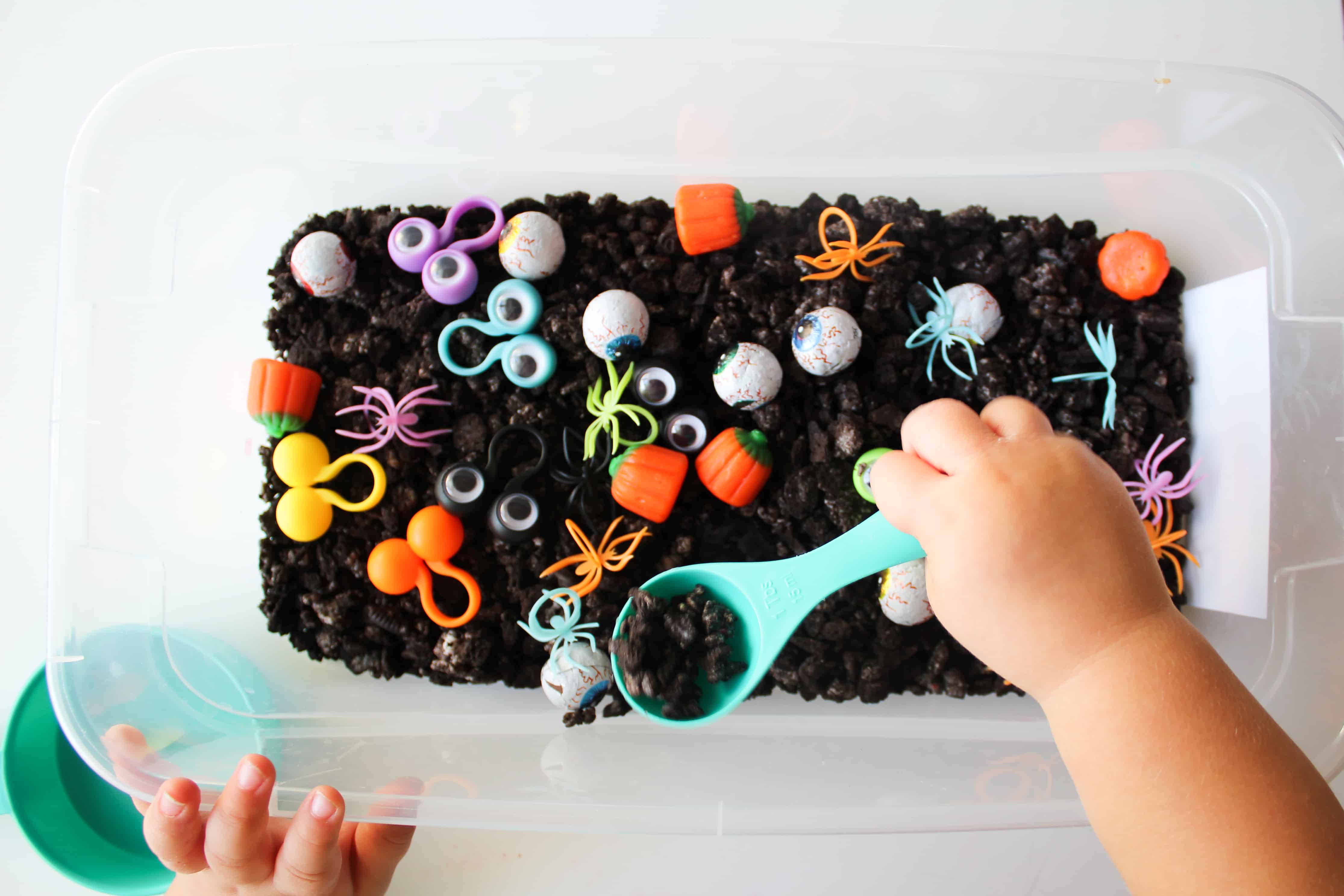 Now that the weather is getting cooler, it’s time to bring some of our boredom busting activities indoors. One of my favorite ways for my kiddos to learn, explore and play is through sensory bins. A mom fail on my end, led me to create this fun and tasty, edible Halloween sensory bin.  An Edible…